if i knew that you were coming i'd a baked a cake.

Yesterday I headed to the Greensboro Farmer's Curb Market with the major goal of buying my mother a present. Soap was out because last year I bought her soap and she said, "Everybody gives me soap. Do I smell?"

So I bought some soap for us, and for her, a nice hanging basket of flowers.

I also picked up some red new potatoes, a tomato (special request from Sandy), and a very small bunch of oyster mushrooms from Gann Farm's booth. He's really getting into the mushrooms. Many people are selling shiitakes now, but he has shiitake, white, portobello, and now oyster mushrooms.

Because I like to snack, I bought a bag of roasted peanuts from Faucette Farms. That should help me stay away from the vending machine at work.

I spent the rest of my money on pepper plants from Handance Farm and WeatherHand Farm. I bought 11 different kinds:

Then I nursed a migraine until I was well enough to drive down east to Mama's house. I knew that the Eat Local Challenge was going to be seriously challenged once I got there. For one thing, I was going to offer to take her out to eat like we usually do, and there are not many options near Marietta, N.C. But Mama had already cooked dinner, and didn't really want to eat out.

Sidenote: The food news from down home is that there is now a Chinese restaurant in Lake View, South Carolina. You have to be from there to understand how absolutely amazing this is. The last step in this exotic direction was pizza at the restaurant in the convenience store.

So we had chicken tetrazini, which had nothing local or organic in it, fruit salad, which had some strawberries from one of the local farms, and field peas and silver queen corn from Mama's freezer from her garden last year. She baked this Vidalia onion/cream cheese pie that was incredible. I have the recipe - it's from Cooking Light or I'd post it. For dessert, strawberry angel food cake. The cake was from a mix, but the strawberries were local.

Not bad, considering she had no warning. But that's pretty normal eating for her. We had the leftovers for lunch today.

After I explained the Eat Local Challenge to her last night, she made blueberry muffins for us this morning. The blueberries are from her bushes. And those muffins were so delicate and delicious!

Late that afternoon, I went over to the farm where there is a house built in 1820. The chimney had fallen down and I wanted some of the bricks. They were in a pile of dirt and my brother and I picked the whole ones out of the top of it. Apparently the chimney had been mortared with mud. The bricks are probably too soft and crumbly to walk on, but I'm going to stack them up, lay some old landscape ties across the tops, and use the shelves against the south side of my house for container plants.

I was guilted into attending Mama's church with her this morning, which I swore off forever after a horrendous homophobic and just plain stupid sermon on Mother's Day two years ago. But Mama knew that she was going to be the oldest mother there this year, and she would be recognized. We offered to hire a hit man last year when she was the next-oldest mother, but fortunately it turned out not to be necessary.

To my relief, the sermon was not offensive and I enjoyed it. It was about Hagar, and I was just waiting for him to launch some right-wing denouncement of Islam, but he actually pulled an interesting message from it about not knowing God's plan when one feels abandoned and talked about helping single mothers. 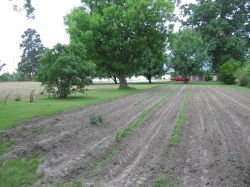 My brother had plowed Mama's garden twice this week. Every year she says that she will not be able to have a garden again next year. But then she complains that no one will plow her garden for her. Mama is 82 and although she is in great shape for her age, she was diagnosed with osteoporosis and it is hard for her to stoop and plant and pick now. She really does want a garden - she has never NOT had a garden. By the time I got there she already had a huge garden planted with seeds coming up in every row except a small area she saved for my tomatoes. I planted a couple of Brandywines, Romas, and one Amish Paste tomatoes in two different spots. The spot she saved for them had a tomato virus in the soil so I talked her into trying them in a different area as well. That soil looks really worn out. She'll put one of the Brandywines into a pot.

So I've had a big weekend. I don't know what I'll do for dinner, but it will be light and probably involve strawberries, cheese, and/or salad. Right now I'm enjoying a New River Pale Ale, "brewed and bottled in Ashburn, Virginia."
Posted by Laurie at 5:23 PM

Thank you for such a wonderful story. Thank you for the education about our local food industry.
I'n not sure how I came across your blog as i was researching natural organic food in North and South Carolina......but it has made my day. Please, if u ever write a book....let me know.
A big fan, Denise dterry001@aol.com