if i knew that you were coming i'd a baked a cake.

Today has been a great day, and it's not over yet!

I went to the Greensboro Farmer's Curb Market as I do every Saturday morning except this time there was one difference. A photographer from the News and Record went around with me while I shopped.

My first stop was at the Molners' booth, where I bought some extra-sharp cheddar cheese that they get from their Amish brethren in Ohio. This is great stuff that will spoil you. Then I bought some baby Japanese turnips from my friends Pat and Brian Bush of Handance Farm.

On my way to Back Woods Family Farm's table, where I bought chicken breasts and soup bones, I noticed that Donna of Epicourier had spelt flour from the Old Mill of Guilford for sale. This is not a regular item for her so I picked up a bag. 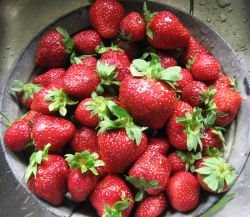 I found my strawberry fellow from McLeansville and bought a large container from him. As I was giving him my money, another woman walked up and said, "I heard that you don't spray your strawberries." See, word gets around. Look, do they look any worse for not spraying chemicals on them? They are incredibly sweet now and I hulled and froze half of them whole and sliced the others to munch on all week long from the refrigerator. I may follow Sarah's simple recipe for preparing them.

The last stop has become a regular one for me - the friendly lady at Rocking F Farm who sold me two pounds of frozen grass-fed, home-raised hamburger for $5. 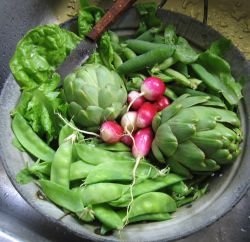 Then I came home, and cut my first two artichokes from my garden! I steamed them, and I made Green Goddess dressing to dip the leaves and heart in. I may have dealt the final death blow to my Oster immersion blender. I believe that I may follow Farmgirl's advice and spend a little extra money on a Kitchen Aid next time. But what a way for it to go out! I used the rest of my olive oil based herb mayonnaise, a little buttermilk, sour cream, more parsley, tarragon, and chives, garlic, and a little salt. This is the salad dressing that I set out to make from the beginning. Now if I can just figure out exactly how I got here...

That's the appetizer. We will also have salad from the garden, and then sauteed shrimp and snow peas. The shrimp are the North Carolina wild-caught that I bought at the market last Saturday and froze. The snow peas are from my garden, and I nearly let them get too full to eat. They were next to the artichokes, who were stealing all the attention.

I like a marinade called Hot and Spicy Allegro Creole Marinade on just about everything I've tried. I decided to try to make my own from reading the ingredients off the bottle. It is mostly soy sauce, and I added lemon juice, dried Kung Pao peppers from last year's garden (I snipped these with kitchen scissors), dried onions, and fresh minced garlic. The shrimp are soaking in it. (Update: I added some five-spice powder to the saute.)

Okay, gotta go cook and eat now. I hope tomorrow is just as fun and relaxing as today was, since I have to work on Memorial Day.
Posted by Laurie at 6:11 PM